FYI: I meant to get this up yesterday.

By now, everyone has most likely caught wind of Kanye’s recent Twitter takeover. Even if you don’t use Twitter, I’m pretty sure you’ve seen all types of headlines.

I knew Yeezy Season was approaching when Kanye reactivated his account. Everyday Ye has something to say regarding his views on free thinking, politics, love, creation, music and shoes.

In the midst of hella tweets from West, his tweet about being the single highest paid person in footwear set Twitter on fire (this was before the Trump tweets).

Kanye said: “I am currently the single highest paid person in footwear. That means I make more money on shoes than Michael Jordan.” — some things I can’t make up.

Everyone under the sun with a Twitter account had something to say. ESPN Sports Business Reporter Darren Rovell quickly joined the conversation to say: 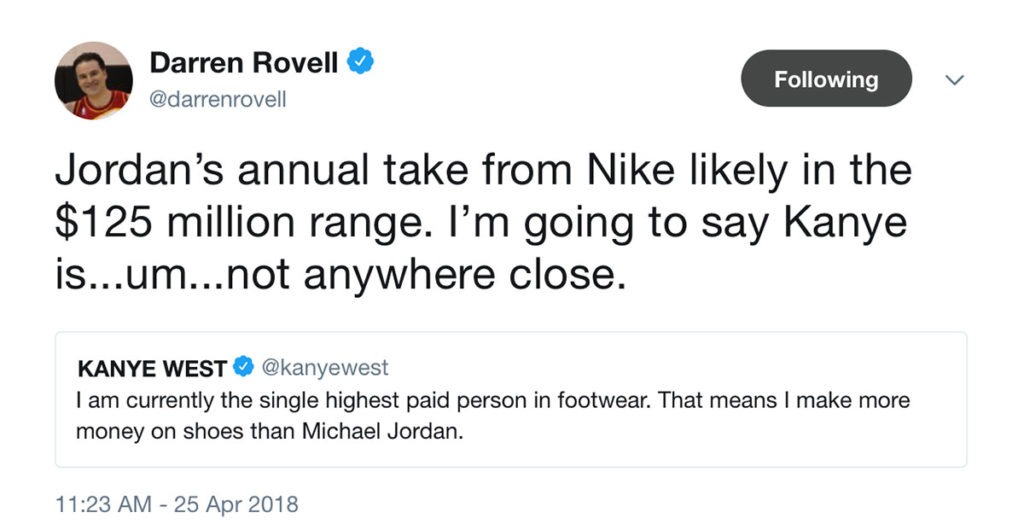 Following his Jordan tweet, Ye went on to say,” there’s been a lot of fake news so I just wanted to give you the facts. Yeezy will become the biggest apparel company in human history by working with the most genius level talents and creating product at an affordable price. I hired the head of the supply chain from the Gap.”

He continued: “We will reach the prices I’ve promised.” Also, “adidashave been great partners and they’ve let Yeezy be Yeezy. This could’ve never happened at Nike.”