Nick Young Wore Something On Court He Never Would Usually Wear

Actions always speak louder than words. If this was any other player, there would not be a reason to even speculate.

However, considering that Nick Young has found his niche as the NBA’s biggest sneakerhead, his choice of footwear for last night’s preseason game was rather peculiar. Spotted on Swaggy P’s feet were the adidas D Lillard 1.

Why is this even news?

After being spotted out and about in adidas Yeezy Boost 350 recently, the extremely proud Nike athlete’s contract was in question. Nick Young would never in his right mind lace up adidas on-court… unless he had an exclusive deal on the table. And that’s exactly what happened during the Lakers preseason game against Maccabi Haifa.

Nick Young’s days with Nike definitely look like they’re officially over. A new sneaker contract has yet to be confirmed nor have we heard of anything since Swaggy P admitting his own signature was on the way. But we hope an announcement comes soon as Nick will need a massive storage unit plus the same treat James Harden got when his adidas deal went official.

Will the legend of Nick ‘Swaggy P’ Young continue without his Nike collection? Let us know what you think in the comments below. 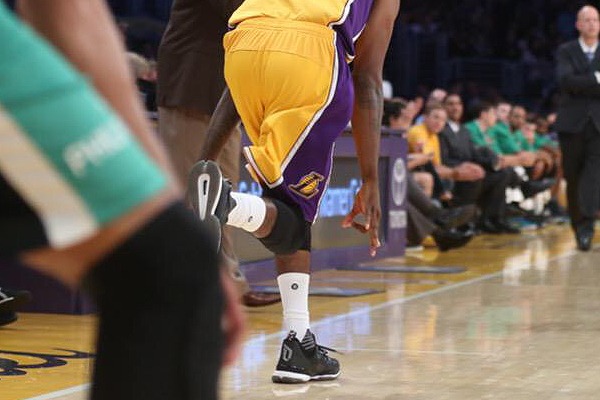