First, I would like to apologize for the late post, but it seems like no one else realized today is the 10th Anniversary of the Jordan pack that changed the game. The Air Jordan DMP! So, I guess it’s all good, plus a late night read is always good.

My original plan was to do something super special to celebrate this anniversary, but you never know with TSG. Ha! That said, stay tuned!

However, I couldn’t let the day end without publishing some content to reminisce on January 28, 2006. Where were you that day? Do you remember? I do. I’ll never forget the days leading up to the DMP release.

Believe it or not, this is how things went down for me in Atlanta.

Like everyone online back then, I called every shop in my area to see which spots were going to have the pack. Raffles and all the newer release systems were not popular back then. You also didn’t have blogs to depend on. Back then you had to do your own homework which including checking NikeTalk daily!

After calling EVERY store in the Atlanta area, I had no idea how I was going to successfully score the pack. One thing that wasn’t an option was coppin’ on eBay. Those prices were high, but according to today’s prices, I guess they were low or fair. But I definitely had no plans on dropping $700+ on the pack.

For the most part, shops were doing the usual first come-first served routine. Once word got out that people started camping at NikeTown LA (or San Francisco) the Monday leading up to the release, I knew the campout lines were going to be insane.

I can’t remember exactly why (maybe that “something told…” thing) I thought this was a good idea, but I stopped by Walter’s to talk to Jeff (head honcho) to get release info. I’m well aware this story is not going to sound believable, but I have no reason to lie. 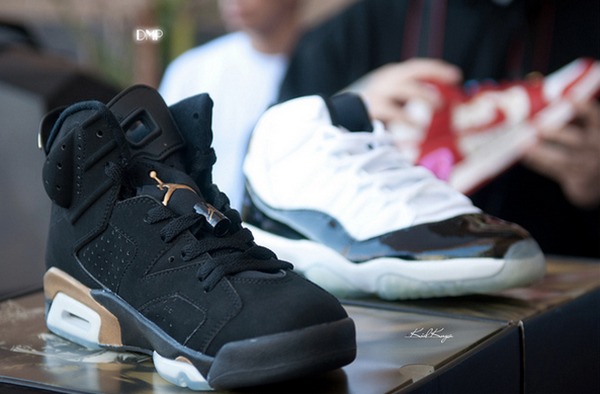 Peep game: I asked him what’s the deal with the DMP drop? He rolled his eyes and and sighed because he was tired of answering that question. For those who are not familiar with Walter’s, just know the store has been around 60+ years and has always been the go-to spot in Atlanta for dopeboys, sneaker freaks, celebrities, parents, college students, etc. I mentioned that so you understand how many people asked him about the Defining Moments Package. Imagine a Yeezy pack – that’s how crazy the hype was.

As I was saying, Jeff rolled his eyes, sighed, and shook his head. He responded that way because he was still fed up from the Altitude Jordan 13 madness that happened at Walter’s in 2005. He simply did not want to deal with the madness again.

I vividly remember him telling me that to prevent an Altitude 13 repeat Walter’s was doing pre-orders. Huh??? Mothalovin’ pre-orders!? You had to put your name down on the size sheet while sizes last, pay for the shoes, and then pick up your pack on January 28th. I couldn’t believe my ears. Is that really the only thing I have to do? You mean I don’t have to spend a certain amount in the store for a chance to cop? Get out of the city, Jeff!

Now most of you are probably thinking the same thing I was thinking, “It HAS to be one per customer.” When you’re the boss, you make the rules! Jeff told me, “As long as the size is available, you can claim the size, but you have to pay immediately to confirm your pack(s).” Yes, I too thought I was dreaming. When it was all said and done, I copped 7 DMPs. Straight up!

I made sure my friends got their size, copped a pack for myself, a pack for gymnastics, and the purchase was so gravy, my mom even copped a golden pack to flip. She’s not a reseller though! lol

Even though I paid for all the packs via the Walter’s pre-order, I still wasn’t going to believe this supremely sought after pack was literally one of the easiest cops of my life.

I used to work part time at FedEx Express as a package handler (pause to all my NY readers). All I could think about at work was those packs. They probably sold our packs, and will just refund us. Maybe staff sold our sizes to local celebs. Whatever negative scenario you can think of, it crossed my mind while I was working.

It was finally time to clock out and head to Walter’s. I stopped to pick up my childhood friend, Tonio, because if I wasn’t being Punk’d by Jeff, there’s no way I was walking out of Walter’s with 7 DMPs by myself. Hell nah!

We parked, walked in, showed the receipt, and they brought all the sizes out. The packs were still in the Nike shipping boxes. I checked the sizes, told Jeff thank you, and dipped out. It was literally that easy for me!

As we used to say in elementary school, I swear fo’ God… on my grandma grave.

Thank you Gentry Humphrey, Josiah Lake and Jordan Brand for changing the game with this pack.

That’s my story. What’s yours?