We’ve all been there. That crazy-hot girlfriend who you love one day, but the next day she makes you want to pull out your hair. She was something else. It was fun for a bit, but that’s why she’s your ex now.

After a few years of heavy rotation in the Ultra Boost 1.0, I was ready for a change. In this game it’s normal to want the next big thing. The hype and marketing helps too. Nike, as usual gets an A+ for the rollout.

I’ve been fooled before by advertising and paid reviews, so I was hesitant to go all in on the React. I wasn’t on board until I saw the triple Blacks (blue heel). I was lucky enough to get my size under retail, so I took the chance.

Even though I was forming my own opinion, I wanted to hear some more honest thoughts on the Reacts. When G dropped his review, I was a bit disappointed; I was ready to get into a nice discussion about these kicks.

Since Nike dropped these I’ve been rotating the React in with my 1.0s. I’ve been wearing the same pair of Ultra Boosts for a couple of years, and they’re still going strong. We all know the power of boost, so i don’t want to spend too much time on that. It’s just hard not to compare the shoes. So let’s get to the React, your crazy ex-girlfriend.

I put the Epic Reacts on and immediately felt that bounce and comfort. As far as the cushioning tech goes, React is the real deal when it comes to comfort. It provides most of that cushion I’ve grown to love with the Ultra Boost, without that sinking feeling.

The responsiveness and stability is a step up from the Ultra Boost. Walking around in them casually has been a treat. There have been times when I really think I’m walking in the UBs until I look down and see the React. Just like your ex, the first date went great.

So what happens when that girl moves in with you? I’ve been wearing the Epic Reacts a few times a week including my 2 mile walks to work. Each day I’m noticing more and more of its flaws. 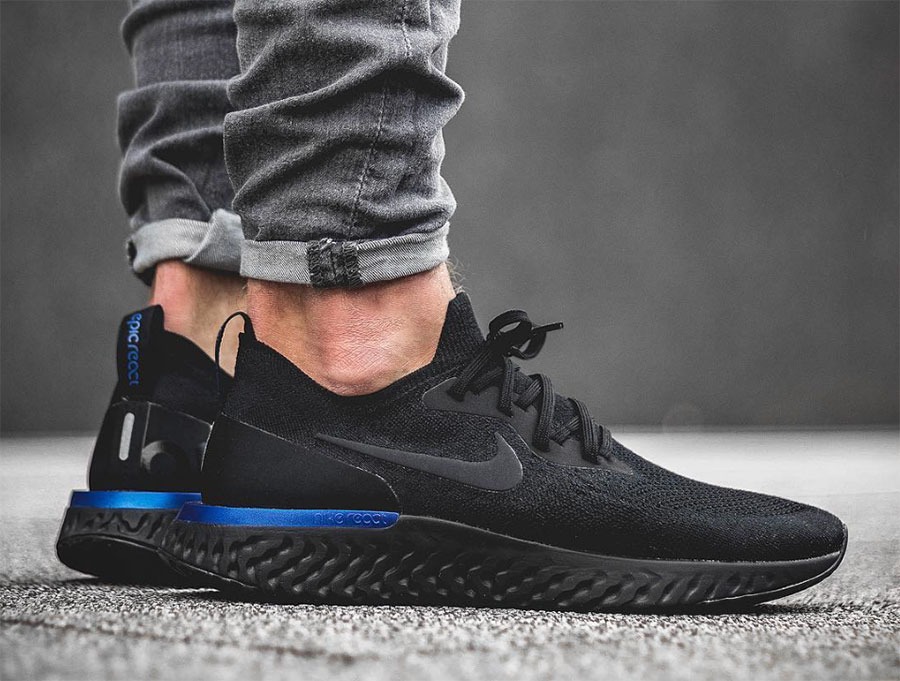 Is it just me, or is Flyknit getting worse and worse each year? It seems like Nike is moving backwards with the tech. While there was definitely some rubbing for the first few wears, years of no-show socks have blessed me with them grown man Achilles, so I didn’t deal with the blister issue.

The entire ankle collar fit is just off. I love being able to slip my UBs on, but I break a sweat trying to squeeze my foot into the Reacts. This is a tradeoff I’m willing to accept, as the fit is lock down and flexible.

Yeah this girl is fine, but her attitude is starting to get on my nerves. Her voice is kind of annoying, her laugh sounds like nails on a chalkboard, and she just starts snapping for no reason. She might seem great on the surface, but her personality is ugly.

This is in line with the recent trend of poor quality, and is hardly exclusive to the Epic Reacts. I just can’t deal with these sounds. By now most of you probably heard about the popping issues. I’ve only experienced the loud popping a few times on carpet. It goes away quickly, but I can only see it getting worse. I’ve definitely lucked out with that, although that’s not the only issue. When the soles aren’t popping they’re squeaking. The heels will randomly start squeaking with every step as the react compresses.

Overall I really do like the React, for now. There are good days and bad days. When the soles are quiet, it’s one of my favorite shoes out right now. Although I would like to see some better colorways, I really like the silhouette. I’m definitely still in the honeymoon stage at this point. If the squeaking and popping gets any worse, they’ll be unwearable, despite the amazing comfort.

If Boost is LeBron, then React is Andrew Wiggins. With all the tools and potential, Wiggins was once considered the next LeBron. So far he’s failed to live up to that hype. Nike has been working on another cushioning system ZoomX, maybe that tech will be the Ben Simmons once it’s easily accessible.

Drop a comment below and let me know your thoughts on the Epic React.