Does his name ring a bell? If you’re not familiar with his name, you should be familiar with his designs. He’s the designer behind classic shoes from Nike’s Running and ACG line including the Air Terra Humara, Air Humara, Terra Sertig, Terra Albis, Air Minot, and many more. If you have appreciation for the aforementioned Nike models, you can thank the talented Mr. Fogg. Learn more about Peter Fogg, his journey with Nike, and what he’s been up to in our exclusive interview below.

How is everything going on your end?

Peter Fogg: It’s all good. Nike is great and Basketball is on a roll!

I’m sure Nike is keeping you busy, right?

Peter Fogg: Never a dull moment! That is the nature of the business. Season after season it’s time for a new line of shoes.

As a matter of fact, how long have you been with Nike?

Peter Fogg: I have been at Nike 16 years.

How did you end up at Nike?

Peter Fogg: This is the abbreviated version! I would say there was a lot of luck and a leap of faith involved. I was working up in Seattle helping Boeing design aircraft interiors when I was told I had cancer. Not a good day! After seven months of treatment I was cancer free and feeling very lucky. The whole ordeal changed my outlook on life and career. I started looking for a new job in the Seattle area without much luck. Then one day I discovered that one of my old classmates from San Jose State, Dave Schenone worked at Nike. I called him up and discovered he was the design director for all the footwear designers. He said they were hiring and asked if I would be interested in setting up an interview. I knew they would not be interested in aircraft stuff so I started drawing shoes and roller blades every night to show at the interview. Some how I convinced them I could design shoes. Then I had to convince my wife and three kids we should move.

Did you always desire to work in the footwear industry or were you just into design?

Peter Fogg: I had no clue about design until my third year in junior college. A teacher there told me about industrial design and suggested I look into it. After three more years at San Jose State I had a design degree and was hoping to be a car designer. That plan did not work out. I was a model maker for a year after college because I could not get a design job. After a year as a model maker I did get into the design field and worked for 7 companies in 14 years all before Nike. Footwear design was not even on my mind until that day I talked with Dave at Nike. 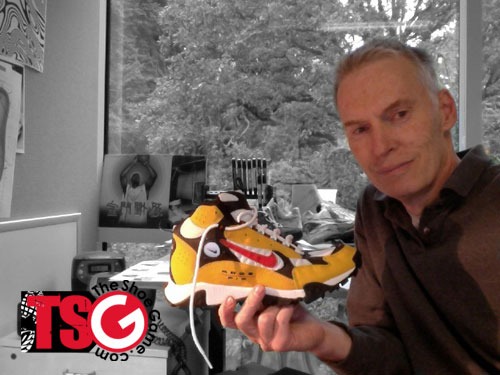 Peter Fogg: Some of the shoe names that might be familiar from Running are Air Humara, Terra Humara, Albis, Sertig, Minot and Tupu. While I was in Running I was lucky to work on a lot of trail shoes. I moved to ACG in 2002 and had a great time designing boots, sandals and water shoes for 5 years. The Tallac, Tallac Pro, Ashiko and Watercat were some of my favorites. I worked in NSW for several years where I had the opportunity to work on a wide variety of shoes. Two of my favorites are the Bakin Posite boot and the Air Umara.

What was the very first shoe you designed?

Peter Fogg: My first shoe was the Air Humara and still one of my favorites.

When you saw the final product of your first shoe, how awesome was that feeling?

Peter Fogg: It was a great feeling to see the finished Humara because it did not have a smooth road to production. At one point in a meeting my developer said he did not like the shoe and felt we should stop working on it. I have to thank my marketing person for believing in the design and fighting for it!

What was the last shoe you designed?

Peter Fogg: My last shoe is my first Basketball shoe. The early samples are looking good. I just moved to Basketball in June.

You saw the excitement on my face when I found out you designed one of my favorite shoes, the Terra Humara. Can you speak on what inspired you when designing the Terra Humara?

Peter Fogg: Several things inspired the Terra Humara. Marketing wanted a shoe that had a technical precision look. I was inspired by a front disc brake and wheel on a motorcycle. The fingers on the shoe radiate out from the center of the shoe like spokes on a wheel. In 1997 Vogue did a nice article on the Terra Humara and the inspiration.

Several years later, the Terra Humara is still here. How does it feel to see people get excited over that shoe or other shoes you’ve designed?

Peter Fogg: I’m surprised the Terra Humara still lives on. NSW keeps bringing it back with new colors and materials. It’s always fun to hear that people like my designs. I really like it when someone tells me that they have been using my shoe for it’s intended purpose and it is performing great.

Describe how it makes you feel when you see someone wearing one of your creations. 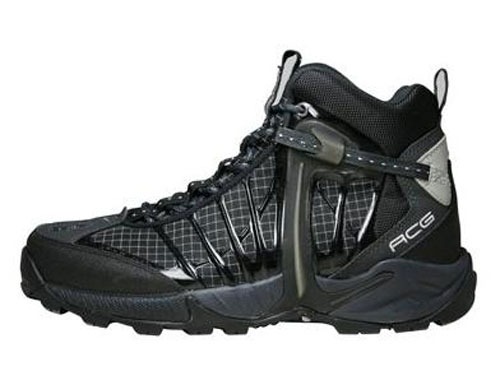 Out of all the shoes you’ve designed, which one is your favorite and why?

Peter Fogg: I have lots of favorites but if I have to pick one I would pick the Zoom Tallac. Sometimes in the shoe creation process everything kind of lines up, Marketing, Design and Development. We wanted to reinvent what heavy leather hiking boots had to be. I was new to ACG and this was my first boot design. The team believed in the crazy design and development worked magic to bring the Tallac to production. The Tallac is one of the lightest highest preforming boots out there that appeals to the top of the mountain consumer all the way down to the city consumer that needs a lightweight comfortable boot for everyday use.

Pressure, frustration, and difficulties are things you’ve had to deal with in your profession. What was the most challenging obstacle that you’ve had to face while trying to execute one of your designs?

Peter Fogg: There are ups and downs for sure, mostly up! One of the most fun and difficult projects I worked on was the ACG Watercat. The upper was woven into the tooling to reduce adhesives and waste. We built a lot of early samples in Beaverton to test out the concept. I had to ask the factory to try some new unusual construction ideas. Leadership and Marketing wanted to drop the shoe because the forecast was low. So I had to do some persuading to get this shoe to market. I think the numbers did end up being low but I’m still happy we made it and I wear my pair whenever I’m doing watersports.

When you worked with Nike Sportswear, what was your NSW title?

Peter Fogg: While I was in NSW I was a senior designer in ACG, Urban and Elements.

Now you work with Nike Basketball, what’s your title and responsibility?

Peter Fogg: I’m a senior designer for Nike Basketball. My responsibility is to design industry leading designs and to help my team do the same.

Coming from NSW, was it difficult adjusting to your role with Nike Basketball?

Peter Fogg: There is always an adjustment period when you move to a new category. Basketball is high profile, and everyone has their eye on us. While I was in NSW I felt like I was under the radar a bit which is ok but when Leo Chang asked me if I was interested in Basketball, I said yes. I needed a change and was looking forward to a new challenge. The chance to work on leading edge performance basketball footwear was very appealing.

What are you currently working on?

Who’s your favorite Nike designer and why?

Peter Fogg: Tinker. He has designed everything from apparel, footwear and architecture at the highest level.

If you were not designing shoes for Nike, what would you be doing?

Peter Fogg: Good question. I guess if Nike did not hire me I might still be doing aircraft interiors. Maybe I would have found work at a design office. Before Nike I had a varied job history.

When you retire, how do you want to be remembered?

Peter Fogg: Retire! Do people retire these days? I’m still trying to answer this question. If people remember me I hope they will remember my fun designs that performed for the everyday consumer to world class athletes.

The Air Flight 89 is back in new colorways.

Not to be confused with our Nike Outlet Alert column.

A truthful review of Nikes newest sneaker from its "This is Trash" program, the Space Hippie 03.

Steal! If you know about this classic Air Max...

That was quick! Nike drops another super clean AF1 Craft.