White Cement Nike Monarch Is Not A Custom

White Cement Nike Monarch is not a custom. Ha!

I hate to say it… but I told y’all last week Nike Monarch shoes might takeover 2018.

The headline might have read like a joke, but I was being very serious. Now that’s not to say everyone is going to buy their first pair of Monarchs this year, but a lot of people will partake in the releases.

People who are fans of the current dad shoe/dad swag trend are going to have a field day. Just imagine if Nike releases a nice amount of GR Monarch colorways as well as limited edition collabs.

That’s a dream come true for hypbeasts around the world. And if you think people aren’t going to buy into the Monarch hype then you’re already late to the party.

A cosign from respected brands and celebrities will only give people the validation or green light they’ve been waiting for. Example: “Undefeated, Concepts, or Travis Scott cosigned the shoe so it’s ok to wear it.” Obviously that was just a few examples because there are many more I could’ve name dropped.

Adding more proof to my prophecy, a White Cement Nike Monarch inspired by the Jordan 3 was spotted during All Star Weekend. Guess who was wearing the shoe? A Nike designer, and I repeat – the shoe is not a custom.

I’m not sure if you remember, but in 2015 TSG published an article that revealed a Black Cement Nike Monarch sample. That pair was foreshadowing into the future giving us a glimpse of what’s to come.

It’s important to note that as of right now, Nike has not confirmed a release date for this sneaker. However, all the signs are pointing in the right direction that 2018 will be Year of the Monarch.

Now all we have to do is sit back and wait for time to do its thing.

Are you going to cop your first pair of Monarchs this year?

White Cement Nike Monarch Is Not A Custom 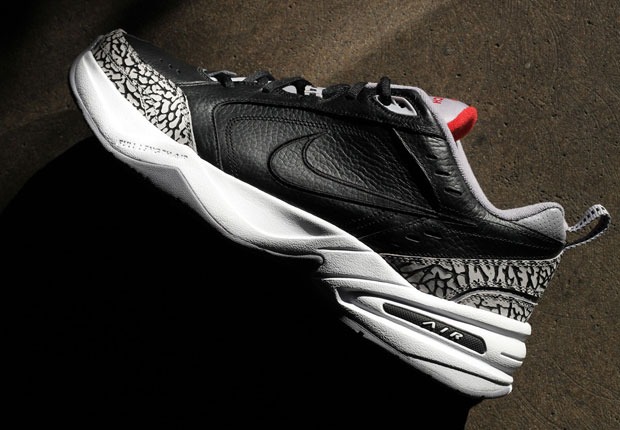