GQ Magazine recently caught up with the fearless leader of ASAP Mob. Rocky was asked a series of questions, including details about his Under Armour deal and his appreciation for Balenciaga’s Triple S sneaker.

Here’s what Flocko had to say about his UA deal:

People would assume, with me going into a business deal with a sports brand, that it would be all about designing or curating a line—making things more lit. But what I liked about Kevin Plank, the CEO of Under Armour, was that he had a vision. He gives, gives, gives. When you donate or you do charities, it’s not about showing people “Look, I’m doing this.” I was in a shelter myself. And I know that when people be donating and shit, you ain’t get no fly shit at Christmases and all that. You don’t see no money. Pardon my French, but you don’t see no money. So I really want to make a difference. So I got with Kevin and Under Armour so we could open up real rec centers with fly shit in them. Not hand-me-down toys and technology—new stuff.
And programs for kids to learn to become entrepreneurs, designers, athletes. They can screen-print their own tees and sell ’em from the store, get that commission on it. I think it’s smart. Those kids need laptops and phones today—that’s their platform. So I want to do something that’s really gonna make a difference, as opposed to fronting with the cameras like, “Ah, I’m doing this, doing that.” We gonna show and prove when we go and design uniforms. We’re gonna start in New York, the tristate area, ‘cause that’s where I’m from. And then go to different junior high schools and high schools throughout the country.

He is definitely more focused on giving back and providing resources to the youth. I think we can all respect that, but what about product, my dude?

But commerce being commerce, you’re going to have to sell some stuff to fund those programs. So are you gonna design a line with Under Armour? A$AP Rocky sneakers?
I’m talking about giving away to schools. That’s not selling, bro—you don’t make any money off of that. What are you talking about? I want to facilitate ways for kids to get better education without calling it education, ‘cause that shit sounds boring. I want to make a way for being smart to be cool. There’s nothing wrong with being a thinker. Where I’m from, being smart has a negative connotation—that means you sold out, that means you’re a geek. I’m just trying to say, “Fuck all that. This is the plan: You are the future, that other shit is the past, so let’s make a better way.” And if I feel like designing some shit with Under Armour, I will.

Well, that’s that. Like I said, he doesn’t sound that interested in creating product, so you might not have to camp out at your local UA store after all. 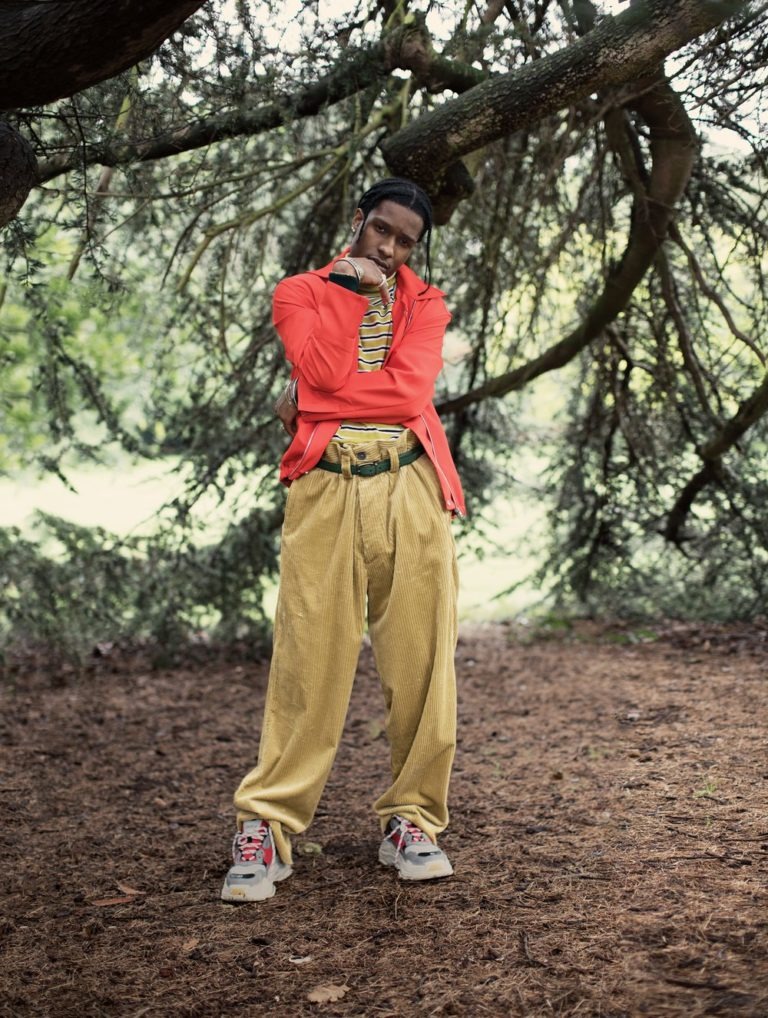 As for Balenciaga’s Triple S sneaker…

The Balenciaga sneakers that you wore in our shoot: They’re a little controversial, and I would like to know why you like them.
I seen those early, and I like them ’cause they remind me of a Raf Simons sneaker, and on top of that, those shits are fire—

Fire, though? I mean, to each his own. It’s funny because if you read the interview in its entirety, ASAP Ant calls them trash, and Rocky defends them of course and mentions that he calls them the Larry Davids.

Now that’s hilarious because I would totally understand if LD or even Leon called the Triple S fire. But hey, do you baby blue.

I guess only time will tell if Rocky decides to design UA product.