When I saw Jacques Slade hit Kmart to pickup the Catapult Commander, I thought it was pretty dope they made an affordable Air Jordan 3 “True Blue.” For the family who can’t afford to spend $200 on eBay to cop the Jordan Brand version, you can’t beat $19.99 for a look-a-like.

Editor’s note: The Kmart Catapult Commander in “White/Blue” is actually sold out online.

Honestly, they don’t look that bad. If you ask me, they’re the hottest $19.99 sneakers I ever seen in my life. Would I wear them? Yes. Would you?

In fact, if there’s one person’s opinion I wanted to get on this matter it was Nick ‘Swaggy P’ Young from the Los Angeles Lakers. Dude is known for rocking the best of the best on court whether it’s 10 years old and falling a part or exclusive Jordan’s designed by children of the Doernbecher Hospital.

I reached out to Nick Young via Twitter with the following:

“@TheShoeGame: Aye @NickSwagyPYoung, you a real one if you wear these on court next season.” 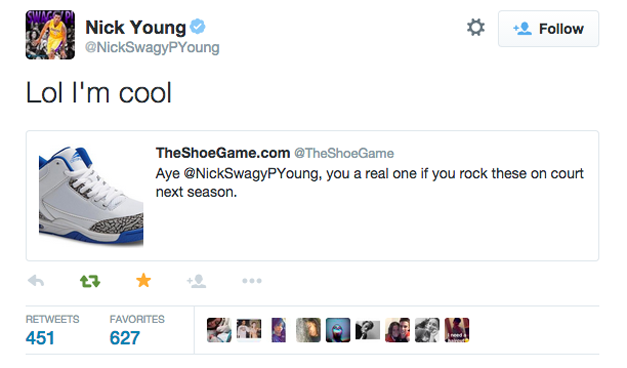 I was actually a bit disappointed he wouldn’t wear the Kmart Catapult Commander on court. That would have been better than Riley Curry taking over her Dad’s post-game press conferences. It actually would have been inspirational for the young kids out there if you ask me. Dude is already playing in Air Jordan’s that fall a part mid-game, Kmart shoes couldn’t be any worse – lol.

In closing, I was going to start a 10,000 signature petition for Nick Young to wear the Kmart Catapult Commander on court next season, but even if we met the quota he wouldn’t be able to rock them due to his Nike sponsorship.

At least we tried…