Opinion: All Brands NOT Named Diamond Supply Should Retire the “Tiffany”

Opinion: All Brands NOT Named Diamond Supply Should Retire the “Tiffany” Colorway

Enough is enough! Being that we’re in Generation Copycat, where it’s cool to look like everyone else, brands have gladly taken things overboard with repackaging someone else’s identity in terms of sneaker releases. I’ve decided to address this colorway jacking issue before it’s too late and gets to Yeezy levels.

Colorway jacking became extremely popular as soon as the “South Beach” Nike LeBron 8dropped. By now, the amount of sneakers that wear the SB colorway since 2010 easily surpasses SKUs in the hundreds. The next colorway(s) that were abused into irrelevance is every Yeezy theme you can name. SoleBox and their Purple Devil isolated toebox being robbed typically goes unspoken about, do ya googles. A lot of these shoes obviously look good because those themes were hits, but the idea of blatantly riding someone’s coattail to success is so damn wack.

Now that everyone has had enough South Beach and Red October, Diamond Supply’s “Tiffany” colorway seems like it’s next up to be played the f\^% out by other brands.* 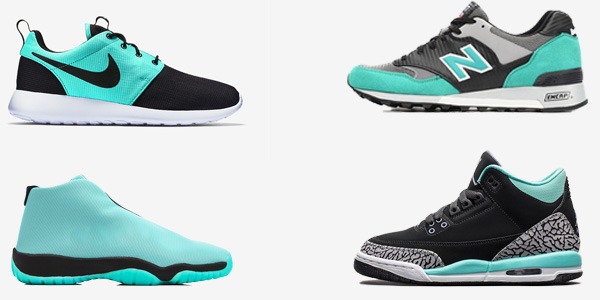 I’m sure all the brand reps love the quote “if it don’t make dollars, it don’t make sense,” but don’t forget integrity holds a lot of value too. Biting styles was never cool, there’s just a lot more people who accept being corny over being original and a lot less people speaking up against that. If you want a Tiffany colorway done right, do what Ronnie Fieg did and get together with Nicky Diamonds for a Diamond Supply collab. And if he says no, move on!

In the words of the God Ghostface, “y’all some shark ass aggins, be original.”

This is a PSA to all you collaborators and brand designers, if you have anything that resembles or is inspired by the Tiffany colorway on your release schedule just take this wise piece of advice from my young bull (see below):

If you agree, disagree, want to expand upon this topic, or just tell me I’m trippin’ leave it in the comments section below. Let’s get the conversation going.